MAN Truck & Bus Polska has carried out business activities on the Polish market for more than twenty years. MAN Trucks Sp. z o.o. operates a manufacturing plant located in Niepołomice near Kraków where heavy trucks are produced.
It is one of the most advanced truck assembly plants in the World, and the vehicles produced there are delivered to customers all over Europe. The manufacturing process is organized according to the just-in-time concept, and consequently component supplies to the production line are planned consistently with the production cycle and are completed using transport sets.

The MAN Trucks manufacturing plant in Niepołomice has used transport sets since its origins. Experience gained over the years of use of several systems enabled the plant management to set precise requirements for a new standard suitable for component logistics.

The main requirement for a design of new transport platforms was to integrate the trolleys commonly used in the manufacturing floor, with various dimensions, and weighing up to 500 kg. The identified areas of improvement included a reduction of noise generated by moving trains of transport sets, a reduced time dedicated to loading and unloading, better work ergonomics and eliminating undesired operating costs caused by accelerated wear of wheels and excessive expenses on maintenance of products based on hydraulic systems. 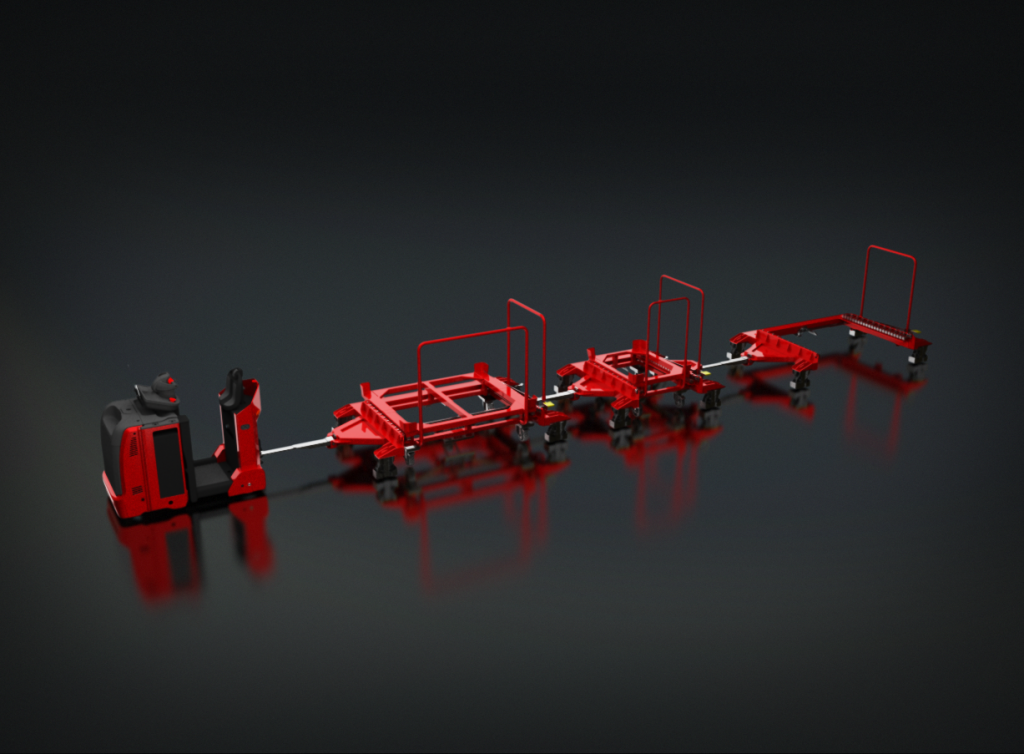 The project was implemented using an internal procedure developed at WAMECH for dedicated solutions. The procedure includes eight consecutive phases, beginning from input data gathering, prototyping phases and ending with after-sale service. Representatives of the MAN Trucks’ logistics division, working together with designers from WAMECH, using technical assistance provided by a Project Manager, developed a set of precise guidelines enabling the team to commence the project. 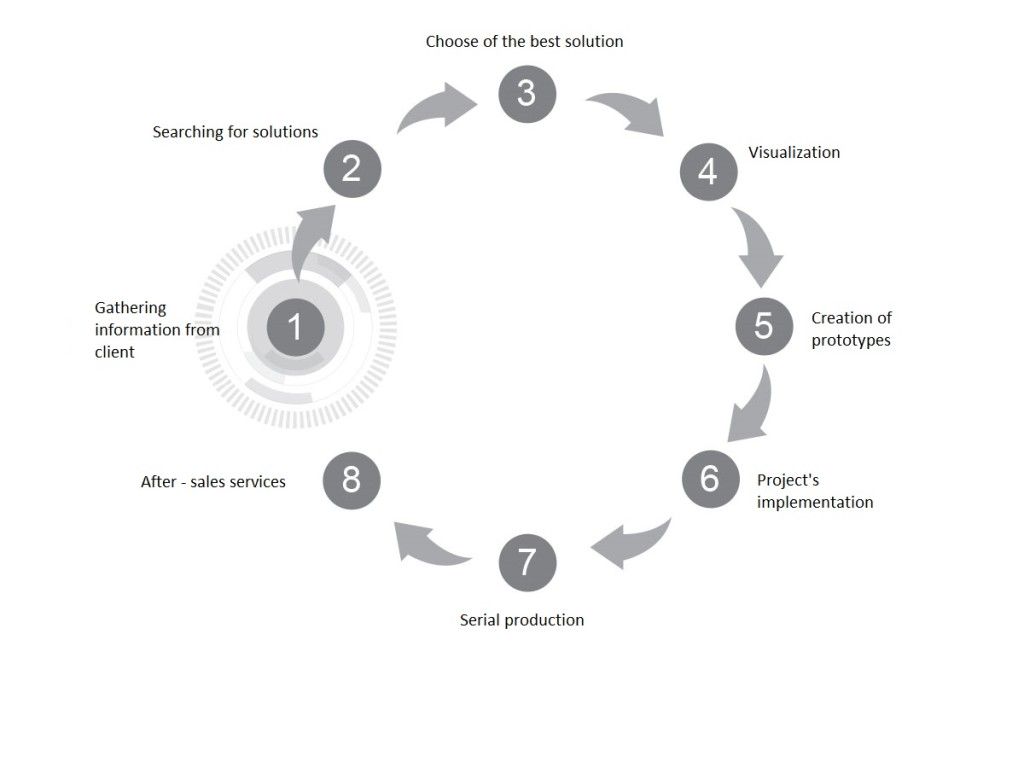 Following mutual consultations and an audit of previous solutions used at the MAN Trucks manufacturing plant, specific areas for optimization of the process then in use were distinguished and described, namely:
– a reduction of noise generated by moving trains of transport sets – the identified causes of noise included clearances between platform components, clearances between trolleys and platforms, containers hitting trolleys and trolleys hitting the floor during transport;
– reduced operating expenses on the trolley fleet – by preventing excessive wear of wheels caused by the method of trolley transport on platforms. The trolleys had contact with the floor during transport which, at a high speed, led to accelerated wear due to abrasion and mechanical damages. The scale of the problem was so large that the factory dedicated a warehouse space to wheel storage and appointed a team responsible for replacing wheels;
– reduced maintenance costs and a better availability of the platforms – the hydraulic wheel control system then in use required frequent, specialist and expensive maintenance. Aeration in the system, leaks and losses of alignment significantly reduced the availability of the equipment;

– a reduced time of necessary operations on platforms and improved ergonomics of use – the platforms equipped with “safety barriers” were inconsistent with ergonomic principles and time-consuming in use. An operator of the mechanism was required to bend and remember to close the safety device each time before a train of transport trolleys could be set in motion.
Also basic technical parameters of target transport sets were defined:
– expected net load capacity of a trolley: 450 kg;
– expected load capacity of a single platform: 2000 kg;
– the platforms should be suitable for transporting trolleys sized: 840 x 1250 mm, 790 x 620 mm and 2430 x 780 mm;
– maximum number of platforms in a train: 4;
– number of trolleys transported in a single train: 8–16, depending on the size of containers.

An analysis preceding implementation demonstrated that the way the trolleys functioned together with the platforms was the main cause of both excessive noise generated by transport sets and excessive wear of trolley components.
The trolleys “loosely” occupied the space on a platform during transport, leaving large clearances and impacted each other on the way through bumps and expansion joints existing on their route.
Platforms designed so as to lift trolleys for the time of transport were proposed to solve the problem. The E-LINER® platforms are equipped with roller strips that interact with entrance sections so that trolleys are lifted by the force of inertia to 10 mm above the floor, using a purely mechanical method. Consequently, the trolleys had to be modified and equipped with special entrance sections suitable for functioning together with the old system used by the customer in a transition period of project implementation and with a new system of lean manufacturing production to be implemented.

MAN Truck continually incurred high expenses on maintenance of the old platforms. This was caused by a high failure frequency in the hydraulic systems used to control the platforms. An alternative solution was proposed, namely the symmetric, mechanical control system installed in the lean manufacturing production devices – E-LINER® platforms. The possibility to change the travel direction at any time was an additional functionality offered by the described solution. Another advantage of a mechanical solution over a hydraulic system was a long mean time between failures resulting in a dramatic reduction of operating costs and a better availability of the equipment. As regards operation of a transport set, an original automated docking (mounting) system was proposed to reduce the loading and unloading time to a dozen seconds. A trolley mounted on a platform is automatically locked and thus prevented from slipping during transport. The trolley is locked by the mechanism installed in two phases to improve safety at work. The implemented solution enables an operator to mount trolleys automatically and intuitively, and reduces the number of tasks completed in a position inconsistent with ergonomic principles. Using the standard solutions implemented in all E-LINER® platforms, the engineers from WAMECH completed a design dedicated to the customer’s plant. However, the design required implementation tests to ensure its consistency with all guidelines, and additional functional tests in production. The task of adapting a large number of trolleys supplied by several manufacturers and characterised by deviations from specified dimensions posed a considerable challenge. Finally, shapes of standardized guides suitable for use in all instances were designed. This significantly contributed to reduced project implementation costs and time. Training of all users in the method of operation of the new system and individual training sessions were necessary to implement the project. Collecting feedback directly from the users, who were enabled to propose additional improvements in this phase, represented another important task in the implementation process. The results contributed to improved functionality, work safety and ergonomics of the design and enabled the manufacturer to launch batch production.

– replacement of wheels in trolleys limited to that required by their normal wear;

– easy maintenance and a long time between failures, resulting in a dramatic reduction of operating costs and an improved equipment availability;

– changes of travel direction made possible without turning back the platform;